Due to a fairly busy schedual today doing a million things other than clay-animation, I only got a few things accomplished today, but some of it's pretty cool. First off I've been painting the cocker spaniel's dress (it's taking a lot of layers for the acrylic to become opaque), also I painted the calf's horns yellow (also you can see the beginning of the fox's half-body armature being built in the back).

But in VERY COOL NEWS I've begun sculpting the hippo character. This is my first hippo, and I think he'll be really great. I personally mixed his color.

Let's hope there's a bunch more to show tomorrow!
Posted by Ryan McCulloch at 2:40 AM 1 comment:

Still Been Workin' Some More

Sorry I'm not explaining any of my progress, but at this point I feel it's pretty self explanitory. These two characters have half-armatures, meaning they won't walk, but will be great for above the waist shots.
Posted by Ryan McCulloch at 10:04 PM No comments: I’ve been keepin’ myself busy over at Tertiary, having fun making these great characters. Unlike Frog Family and Critter Song, the characters in this production are having armatures built for them, which will allow them to do a great deal more things than the non-armature characters, mainly walk.
The first step to building an armature (The way I do it at least), is to twist two pieces of wire together with an electric drill on one end and some pliers at the other end. Then I take some plumber’s epoxy putty and put it on the wire. You want to cover all the wire with a thin bit of putty. The putty represents the “bones” of the characters, so leave exposed wire where you want the joints to be.

Above you can see the armatures with the heads so you can get a better idea about the characters’ proportions.

My initial sculpt of the fox was way to large and would have been problematic so I had to scale him down. Here you can see the difference in sizes. The lighter the head, the more capable he’ll be at various movements.
Before I can start sculpting the clay onto the armatures, I first have to melt some on to bond with the armature, this will keep the clay sticking to it much better, and keep the armature from busting out of the character’s flesh like some cheap 80’s horror flick. I used a double boiler (I pan within a pan of boiling water) to melt the clay and then applied it to the armatures.

WARNING: If you plan on doing this, make sure you are in a very well ventilated space, with lots of windows open, etc. The clay fumes can get nasty. Also remember to not cook the clay directly on a stove top pan, use the double-boiler, because it keeps the fumes to a minimum, and keeps the clay from burning.
This is a very brisk description of how this is all done, maybe in the future I’ll go into a lot more detail for those who are interested. Until then, I should probably get back to work. Ciao!
Posted by Ryan McCulloch at 8:47 PM 2 comments:

Hey, hey! Hope everyone had a great weekend! I didn't do anything worth posting over the weekend so I thought I would share an early character design sketch so you can see what the clay characters came from. Lot's of times the characters that I design in 2-D don't look as good in 3-D, but these guys definitly look better. Hopefully gonna build some armeratures today, so I will keep ou posted!
Posted by Ryan McCulloch at 10:36 AM 1 comment:

I finished the fox prototype today. My black clay hasn't come in yet so I used a deep blue, which oddly looks kind of cool. So now I'm debating in my head if I want to keep him with a blue nose. Might be different. I've certainly never made a character with a blue nose before. I also want to apologize for the crappy picture quality of the last couple posts. My digital camera batteries died so I'm using the web-cam on my computer to take the pictures and they're kinda grainy.
Posted by Ryan McCulloch at 5:48 PM 1 comment:

Got A Little More Done Today

I didn't have a lot of time to spend on sculpting today, but here's what I did in the time I did have.
Posted by Ryan McCulloch at 12:17 AM No comments:

Hey everyone, and welcome back to Poor Claymator. Much has changed since I finished "Critter Song" just over two weeks ago. I have relocated to West Palm Beach, Florida, where I am heading the animation department for Tertiary Productions. Things have been moving very quickly since we want to get a handful of shorts ready to premiere with the official launch of MOLI.com this October. Storyboards were approved Monday, character designs approved Tuesday and modeling began today. And here is an early prototype for one of the main charcters, can anyone guess what kind of animal he'll be? I'll try to keep you all updated as much as I can on these new shorts, and I'll let you all know when Critter Song will premiere. Ciao!
Posted by Ryan McCulloch at 12:01 AM 2 comments: 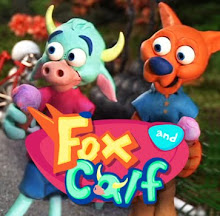 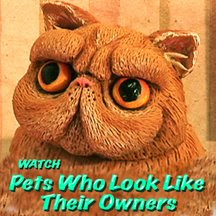